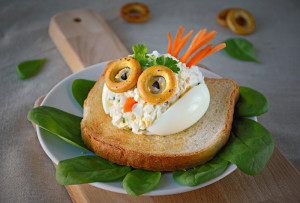 In the past few years in the United States, our eating habits have taken center stage. Michelle Obama has made ending childhood obesity her mission as First Lady; millennials have long been known as “the foodie generation.” We see trend pieces about young kids who happily eat more diverse foods—but we also see viral videos of American children who taste dishes common in other countries and are disgusted. Have we really left the age of the picky eater?

It’s true that millennials eat more culturally diverse foods than any previous American generation. Part of this is due to immigration and America’s well-deserved reputation as a cultural melting pot; part is the effects of globalization, chef-centric television shows, and the internet; and part is the younger generation’s overwhelming return to cities, which tend to offer a much wider variety of culinary choices than small towns and suburbs. It stands to reason that as millennials become parents, the children will adopt their parents’ open-minded attitudes toward food.

If American children are indeed eating healthier, more varied meals, it can only be a good thing. To make sure your kids are getting adequate nutrients, a good rule of thumb to follow is to count the colors of food on a given plate. Different colors tend to reflect different nutrients, so the more the better.

In fact, studies have shown that kids actually prefer plates that have seven different food items and six different colors. This is important because it highlights a key difference in what adults and children find visually appealing; adults tend to prefer plates with three items and three colors. So, when we serve children food, we often do it in a way that appeals to us but not to them, which can contribute to a picky eater’s adverse reaction.

If you have a picky eater, don’t worry. To some extent, kids will be kids; nutrition experts stress that picky eating is a normal rite of passage. They also point out that it’s typically a short-lived stage. There are several schools of thought on how to get picky eaters to eat the food you give them. Almost all of them have the same core rule: do not give in and make the child whatever he wants. This is, of course, easier in theory than practice. Here are a few tips we recommend:

Enforce the “polite one bite” rule

Research has shown that when children reject a food, they must be exposed to it at least 8-10 more times before they will accept it. The “polite one bite” rule states that when a child is served a rejected food, they must take one bite. They do not have to finish it; studies show that being forced to finish a disliked food can make childhood food aversions stronger and cause the child to associate negative feelings with mealtime. To try this method, make sure there’s at least one thing on the child’s plate that you know he or she likes, but also include several nutritious rejected foods. The goal of this rule is to get a child to like the rejected food long-term, not necessarily to eat it that day. It also gives you the opportunity to teach good table etiquette!

Humans are predisposed to prefer sweet tastes (think breastmilk) to bitter ones, such as broccoli or Brussels sprouts. There’s science to back this up; bitter flavors often signal that something is toxic. We lose taste buds as we age, so children are biologically more sensitive to taste than adults. Some research also suggests that certain children are genetically more sensitive to bitter foods than other children—so your picky eaters might just be overwhelmed by flavors that taste too strong to them! To counteract this, prepare rejected foods in a variety of ways to see if the children have more positive reactions. For instance, roasting vegetables brings out their natural sweetness. Or, if a child can’t stand the texture of cooked veggies, try serving them raw, with a palatable dipping sauce.

Consider hiring a nanny who cooks

The reason many millennials and millennial parents move to cities is the proximity to reliable employment with higher salaries. However, due to the cost of living in many cities, a lot of millennial parents both need to work. Though it’s often not talked about, many young children who eat a variety of foods have nannies who cook nutritional meals for them. Many modern nannies are able to prepare a range of dishes and cuisines. To find a nanny who can cook healthy, culturally diverse, and kid-friendly meals, try consulting a nanny placement agency. Nanny placement agencies complete background and reference checks and are well-equipped to determine whether or not a potential nanny is right for a given family’s needs, and that process includes inquiring about both the family’s culinary requirements and the nanny’s skills.

Children are more likely to eat meals they have helped prepare. Take them to the store with you and let them pick out a few items from the produce section. Then, make something with those items together. You could also try preparing a meal that requires assembly, such as a stir-fry or burritos. Provide an assortment of healthy fillings, and let the child choose 3-5 to include in the meal. That way, they feel as though they have more control over their food, but you can still be sure they’re getting the proper amount of nutrients.

We all know kids love games—why not use it to our advantage? For decades, parents have pretended spoons of food were airplanes to get babies to eat. The same principle can apply to toddlers or school-aged children. Use cookie cutters to make food into fun shapes, or devise a make-believe game in which the child needs to eat a certain amount of a given food to “level up.” For example, try telling your picky eater that broccoli are trees and he is a dinosaur who needs to eat a certain amount of trees to outrun a mean T-Rex. That broccoli might just get a little more interesting!