History of the Nanny 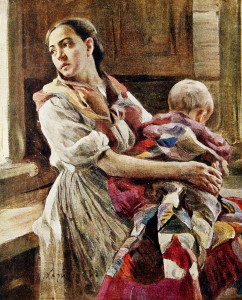 Etymologically speaking, the “nanny” is a relatively recent invention; its first recorded use, noted in the Oxford English Dictionary, was in 1785. However, the profession itself stretches much farther back in time. What is now a “nanny” used to be called a “nursemaid”; a “wet-nurse” (for caregivers who also breastfed the children); a “dry-nurse” (for caregivers who did not breastfeed); and simply, a “nurse.” These terms date all the way back to the early 1300s.

The word “nanny” itself is of questionable origin. Some scholars have connected it to the Greek root nanna, which means aunt; the Welsh word nain, which means grandmother; and the Russian nyánya, which means nursemaid. Others connect it (and all its possible linguistic root words) simply to baby talk, and the fact that “na” is one of the first sounds infants learn how to make.

The history of the nanny as a profession is an interesting one, and there have already been several books written on the subject. Although nannies have undoubtedly existed in all cultures across the world, the nanny as we know it began with the British Empire. Traditionally, nannies worked as servants in large, typically aristocratic households and usually reported directly to the lady of the house. According to historians, nannies often occupied a strange place in the hierarchy of a formal home; they existed in a space between the family and the domestic staff, and oftentimes were not accepted by either class. This made for a lonely life.

Nannies also worked and lived in the homes of the administrators of colonial empires. These women were typically natives of the area under colonial rule, and often stayed with the families from childhood to old age, caring for more than one generation of children. If the officers were assigned a new post, they would sometimes bring their nannies with them.

Nanny responsibilities at the time included all aspects of childcare, from bathing and dressing to nursing and entertaining. Typically, a nanny also served the lady of the house and provided assistance to any other ladies’ maids with housekeeping and cleaning. If the nanny were educated, she would also teach the child until he or she was old enough to be sent to school for a formal education.

Many accounts gloss over the question of whether or not native nannies during the colonial period were compensated for their efforts; it is probable, given the time period, that they were not. When nannies were paid, it was very little because room and board were considered the majority of most nannies’ compensation. However, in a time when most young women were not allowed to work or support themselves at all, nannying gave unmarried girls the opportunity to live independently. As such, many girls found it to be an attractive prospect.

Over the past few centuries, nanny responsibilities have evolved, and with that evolution, the position of “nanny” has been segmented into several different, more specialized subsets. Today, there are live-in nannies, live-out nannies, weekend nannies, mother’s helpers, teen chaperones, mannies, governesses, holiday nannies, nanny housekeepers, and babynurses, among others. This specialization within the nanny industry serves to help families better describe the kind of person they’re looking for as well as help prospective nannies define their skillsets.

In the twenty-first century, nannying has become a respected career; today’s top nannies command rather impressive salaries. This is due in part to greater recognition of the importance of childcare, as well as increased awareness of domestic workers’ rights. There are now professional associations for nannies, such as the International Nanny Association (of which the Nanny Authority is a member), as well as various schools and programs that provide training to prospective nannies. The formation of nanny agencies has also afforded a secondary protection to nannies. By educating clients on how to provide fair and taxable salaries, options for health insurance, and nanny contracts, placement counselors are able to vouch for their candidates’ rights. The Nanny Authority’s parent company, Pavillion Agency, was the first personal service placement firm in the U.S. to put an end to charging fees to its applicants. Though it’s commonplace now, at the time it was a revolutionary change in the way agencies do business.

So, what’s the future of the nanny? We don’t know! We live in an exciting time, with new technologies, evolving gender norms, and a growing acceptance of families in which both parents work. The field is always adapting to meet its clients’ changing needs—it’s part of what makes working with childcare professionals and families so rewarding. What we do know is, there’s always  new generation of parents who work and children who need nannies, and we are and will continue to be a constant source of industry advice and help to both families and caregivers. Contact us today to learn more about our services!

Posted in The Nanny State