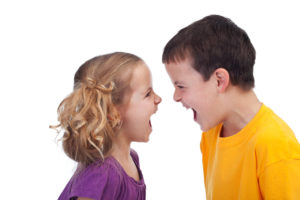 If you have multiple children, you’ve undoubtedly encountered sibling rivalry—the jealousy, competition, and fighting that occurs between siblings. Problems typically start right after the birth of the second child, or sometimes right after you tell your firstborn that they’re going to have a little brother or sister. (Once, we had a discouraged mom tell us that her son, upon finding out that he was going to have a little sister, stood defiantly on the family’s pool table and peed on it—then told her that when the baby arrived, he would “throw her in the trash!”)

These conflicts can be the bane of a parent’s existence. Conflict between siblings is natural; knowing when to let them fight it out and when to step in is one of the trickier tightropes all parents and caregivers must walk.

Why Do Siblings Act Up?

Oftentimes, what inspires sibling rivalry—and certainly what inspired the little boy on the pool table—is competition for parental attention. If one child feels that they are being or are going to be ignored in favor of their sibling, this can cause them to act out. Remember, young children often struggle with the concept of empathy; though they begin to develop social-emotional skills in preschool, their brains are still not fully developed, even as teenagers. It takes time for a child to learn to understand perspectives outside of their own.

If you have a nanny or other caregiver who can help you out with the kids, even just by playing with one child while you attend to another, this can help tremendously. Making sure to spend devoted one-on-one time with each child should help resolve conflicts based on parental attention.

Nannies have a great many tools at their disposal to deal with childhood conflict resolution. These can range from encouraging games that require cooperation and sharing—especially when compared to other childhood games, like cops and robbers, that pose kids against each other—to simply providing the child with a comforting shoulder to lean on or an unbiased confidant to talk to.

A nanny can also help foster friendship between competing siblings. Sometimes, fighting children will be more responsive to directions from a person they see as their playmate or their friend, rather than a disappointed parent. We all remember that one teacher, babysitter, aunt, or other caregiver we bonded with and confided in as a child; it is often easier to take advice from that person, even if it’s the same advice our parents would have given.

Working Through Different Types Of Conflict

In some cases, sibling rivalry and conflict stems simply from differences in gender, age, development, and temperament. These kinds of conflicts are more difficult to resolve because they require emotional maturity, which develops in children at different rates. An older sibling will often be frustrated by a younger sibling tagging along; a brother and sister might fight because they want to play different types of games with the same toys; and an extroverted child may feel neglected or abandoned by an introverted sibling.

Though it’s tricky, these kinds of clashes can be worked out. For example, in the first situation above, you or your nanny might remind your teenager that the reason his younger sister wants to tag along all the time is because she looks up to him, and emphasize what a good role model he is to her. Or, in the third—when your extroverted daughter feels hurt when her sister would rather read a book than play with her—you might use the opportunity to teach her to empathize with and understand a personality very different from her own.

Kids who grow up with siblings are forced to interact with and learn to coexist with other children in their lives at home in addition to at school. Though it may be trying at times—especially for a parent who is desperate for a moment of peace and quiet—navigating these conflicts can actually help your children mature and learn conflict resolution skills that will aid them throughout their lives. And, if you’re at your wits’ end, try to remember this fact: Even siblings who fight a lot as children usually get along as adults!