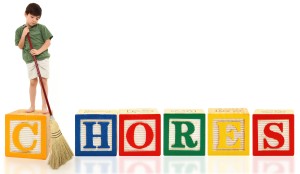 Every parent and caregiver has found him- or herself faced with this question: How do you get kids to do their chores willingly, without nagging reminders or, worse, a tantrum? Sometimes, it feels like it would be easier to just do them all yourself, rather than teach a stubborn child to be responsible. But a nanny’s responsibilities involve teaching children to be well behaved human beings—and that means they need to learn how to work hard and be responsible, even when it would be more fun to play a video game or read a book.

We asked a couple of our favorite nannies for the best ways to teach responsibility and make chores more fun. One nanny told us this tried-and-true method for ensuring that kids keep up with their chores:

A dedicated chore chart can be a great way to remind kids to do housework without having to nag them. The most effective way to do a chore chart is with small—yet significant—rewards.

A lot of the time, chore charts get started and then fall by the wayside after a week or two, either because the kids aren’t doing the chores or the parent/caregiver isn’t keeping up with them as well as she had anticipated. It may seem a little underhanded, but the best way to get kids to do their chores is to rely on their innate competitive spirits. When chores become a game—especially one they can play against each other—kids are far more likely to do them.

The trick is to reward good behavior when it happens. If one child did all her chores when she was supposed to without being reminded, make a note of it by giving her a gold star on the chart. If another child did his chores particularly thoroughly, give him a gold star. Then, when they’ve collected enough stars (the amount is up to you!), surprise them by removing one of their usual chores for the week or giving them an extra privilege they don’t usually get.

And, if the chore chart doesn’t work for your family, another nanny suggested this fun (and devious!) game her mother taught her…

This is a game my mother used to play with my siblings and me when she had exhausted all her other resources for getting us to behave.

First, we drew pictures of all sorts of colorful, strangely shaped fish; there were probably thirty in all. Then, she would give us Post-It notes and let us write down three or four “challenges” each. She would write the rest.

We always wrote silly things: “Spin in a circle five times fast”; “sing the Barney song while standing on one foot”; etc. She would put in a few fun ones, but mostly, she wrote challenges that involved housework. “Pick up all the toys in the playroom in 10 minutes and get a prize!”; “Unload the dishwasher as quietly as you can!”

Sometimes, there would be rewards attached to the challenges—for instance, choosing what we would have for dinner one night that week, or a small trinket. There was always one fish that had a coveted chocolate treat attached to it. For my family, the treat of choice was a Kinder Surprise egg, which we loved and never got to eat at any other time. The hope of being the kid who got the Kinder Surprise was what kept us playing the game.

We always begged my mother to let us play The Fish Game. I didn’t realize until well into adulthood that it existed primarily to get us to do our chores. The challenges can be anything; I’ve used it to teach kids math, reading, and handwriting skills, too.

These are just a few methods used by Nanny Authority nannies to teach good values and make chores more fun. The Nanny Authority works with highly educated and experienced career nannies who have long-term, verifiable references, take their nanny responsibilities seriously, and genuinely love working with children. To find out more about our service and how our nannies can assist your family, contact us today!

Posted in The Nanny State