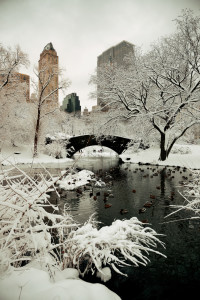 It’s just now starting to feel like winter in New York, which means it’s getting a little harder for all of us to convince ourselves to go outside. We’ve already written about fun winter activities that you can do indoors, but we shouldn’t forget all the kid-friendly entertainment New York City has to offer.

Luckily for nannies and parents everywhere, there’s no end to the exciting, kid-centric things happening here in the city in January and February to get you and the kids active and out of the house! The next time everyone is antsy and you’re not sure where to go, why not bundle up and trek out to one of these fun NYC winter events?

Winter Jam NYC: This free winter sports festival, called “NYC’s Ultimate Snow Day” is held every year in Central Park—and even though this year is considerably less snowy than most, the event brings its own fresh snow for New Yorkers of all ages to enjoy! The festival includes opportunities to learn to ski and snowboard, as well as snowshoeing, kicksledding, sledding, and a snow field to play in. Also included is the “Taste NY Winter Market,” where you can buy wintry treats and warm beverages. Take note, though: the lines may fill up fast, so get there early. Saturday, January 23, 11 a.m.–3 p.m. in Central Park, Bandshell area (entrance at 72nd Street).

Hoot & Howl Weekend at Wave Hill: Are your kids fascinated by the natural world? This weekend at Wave Hill in the Bronx, kids will have the opportunity to learn about owls and coyotes, and how these naturally solitary animals have adapted to urban life. Visitors will get to meet an owl, make themed crafts, and listen to stories. January 23-24 at Wave Hill (W. 249th Street at Independence Avenue). Open 9 a.m.–4:30 p.m.

Inventgenuity Festival: If the weather doesn’t look like it’s going to cooperate for either of the above weekend activities, consider checking out Brooklyn’s Inventgenuity Festival. It’s free, but it does require registration, so act fast. The festival involves a big collaborative project, various workshops, and demonstrations. This year’s theme is Natural Machinery, and the collaborative project will have kids constructing “real and imagined mechanical birds.” If your child is mechanically minded, this is the perfect festival to let their creativity shine! January 23-24, 11 a.m.–5 p.m. at PS32/MS442 in Carroll Gardens, Brooklyn.

Winter Carnival at Bryant Park’s Winter Village: This year marks the second annual Winter Carnival at Bryant Park. The weekend will feature curling lessons, a skating showcase, a silent disco, ice golf, and a ping pong tournament, among other fun events. If you get cold, there’s also a warming lodge where you can get cozy with a cup of hot cocoa. Open from noon–10 p.m. February 5 and 6.

Chinese New Year Family Festival: Kick off the Year of the Monkey in style! The China Institute will be hosting a Chinese New Year family celebration, featuring a free lion dance and kung fu performance, as well as traditional Chinese New Year foods, face-painting, and an interactive storytelling version of “the Legend of the Monkey King.” There will also be ticketed workshops in dumpling making, paper lanterns, and paper cutting. This is a great way to either expose your kids to a new culture, or celebrate your own! February 13, 11 a.m.–3 p.m. at the China Institute (100 Washington Street).

BAMkids Film Festival: This year, Brooklyn’s favorite children’s film festival turns 18! It presents children’s shorts and features from 25 different countries and is sure to impress your little cinephile. Shows begin at 10 a.m. and last through mid-afternoon on Saturday, February 27 and Sunday, February 28. The films are recommended for ages 3–11, but let’s be honest—they’ll be fun for you too!

NYC Audubon Winter Eco Cruise: Are your kids interested in seals and wildlife? It’s a common joke that New York City’s natural wildlife consists of pigeons, squirrels, rats, and mice, but there’s much more to the city than that! This winter cruise around NY Harbor will give kids a chance to look for harbor seals and learn about the diverse winter birds—geese, loons, and sandpipers, to name a few—that call NYC home. Every Sunday, Jan 23-Mar 13. Boards at 11:45 a.m., sails 12-2pm.

Superheroes in Gotham: New York has a long history with superheroes; in the last thirteen years alone, it’s been destroyed seven times in various superhero movies. That’s not including the decades it’s been featured as the setting of comic books and other superhero television shows! “Superheroes in Gotham” tells the story of the birth of NYC superheroes in the 1930s all the way to what they are in their present forms, and how they’ve inspired and influenced the works of contemporary artists in New York and abroad. A must-see for any comic fan! The exhibition is open through February 21 at the New-York Historical Society (170 Central Park West and 77th Street).

Gazillion Bubble Show: The Gazillion Bubble Show has been featured on television shows from Oprah to Ellen to Letterman—it’s a landmark for NYC kids. Haven’t been yet? The show involves “an interactive bubble world” where you will be “dazzled by spellbinding lasers, spectacular lighting effects, and jaw-dropping masterpieces of bubble artistry.” The show is open all year, and tickets are available on sale now through November. Showtimes are Fridays at 7 p.m.; Saturdays at 11 a.m., 2 p.m., and 4:30 p.m.; and Sundays at noon and 3 p.m.

Hot Chocolate Festival: City Bakery (3 W. 18th St., between 5th and 6th avenues) will feature a different flavor of hot chocolate every day in February. Bring the kids a few times this month—you don’t want them to go too sugar-crazy—and see which tastes best! City Bakery is open 7:30 a.m.–7 p.m. on weekdays, 8 a.m.–7 p.m. on Saturdays, and 10 a.m.–6 p.m. on Sundays.

With all of these fun NYC winter events going on, the warmer weather will be here before we know it!