The Impact of Touchscreen Tech on Kids 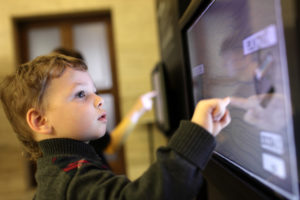 It seems like every week new scientific research is released about screen time, kids, and the benefits and detriments of touchscreen technology on developing brains. What’s a parent or nanny to do? In the face of so much conflicting research, many parents and caregivers aren’t sure who to trust. To help, we’ve broken down some of the latest research about smartphones, tablets, and child development.

The most important thing to keep in mind about touchscreen research is this: the iPad came out just six years ago, and in the years since, there has been an explosion of ever more sophisticated smartphone and tablet technology. What this means is that academic research is far behind—and it’s impossible for researchers to have completed any long-term studies about the effects on developing brains.

Who’s researching touchscreen technology and why?

The American Academy of Pediatrics (AAP) has erred on the side of caution when it comes to technology: no screen time for kids under two, and a two-hour limit daily for kids older than two. However, many parents have found these guidelines to be impossible to follow, and the AAP is in the process of revising them. They are set to be released in late 2016. Other research outlets that are undertaking longer-term studies on the effects of technology and screens on children include the UK-based TABLET Project, the Christakis Lab at the Seattle Children’s Research Institute, as well as a wide variety of university-based studies.

What worries researchers are the ways in which tablet technology and touchscreen devices might be physically changing children’s brains for the worst—for instance, affecting their motor control, language skills, eyesight, and attention. These possibilities are especially troublesome in children under five years old, who are prone to becoming dependent upon technological devices. (If you have a toddler yourself, you’ve probably noticed this—especially if it’s your phone that they’re addicted to!)

What have researchers discovered?

There are a few things researchers are pretty certain about, and most of them follow what you might assume to be common sense. Children learn better by interacting with other people and with objects in the real world; speaking to your children and giving them physical toys to play with (think very tactile, sensory toys, like blocks or puzzles) will always be better for their development than letting them passively listen to a voice or touch a flat screen. A child who is interacting with other children or adults is more likely to develop social and emotional intelligence skills more quickly than a child who spends most of his time playing with a touchscreen toy in isolation.

The main problem with screen time is the multiplicity of screens; it makes no difference whether the screen in question is a TV, a tablet, a phone, or a computer. Hours of time spent at these tasks can distract a child from active, imaginative play, as well as limit child-caregiver interactions. Cumulatively, this will have a negative effect on a child’s language development, gross motor skills, and social development.

One part of the screen time debate worth mentioning is the quality of content on smartphone apps that are listed as “educational.” The majority of these apps provide no research-based guidance or evidence of educational value, according to literacy experts at the Joan Ganz Cooney Center, and there is no regulatory body to hold them to any sort of educational standard. There is also a great deal of evidence that, even when apps are proven to be educational, children learn better by experiencing the physical world than by seeing 2D images of that world on a screen. Furthermore, the fun and exciting audiovisual cues that often go along with educational activities in apps have actually been found to confuse and distract young children, to the point of negating the app’s educational benefits.

How can I best monitor screen time for my children or the children I nanny for?

A good thing to keep in mind is that, as adults, we interact with technology in a variety of ways. There are modes in which we interact that are educational and intellectually stimulating; there are modes like TV that serve primarily as entertainment; and then there are the aspects of technology that are total time-wasters, like addictive smartphone games. While it is important to keep as much technology as possible out of your children’s hands, especially if they’re under 5, it will be impossible to shelter them from it forever. Therefore, what’s most important is to make sure the technology they do have access to is age-appropriate, primarily educational, and by no means a time-waster. After all, if an adult can’t control him- or herself around Candy Crush or Angry Birds, how can anyone expect a child to?

You can check out our Pinterest page for great sensory activities and ideas for age-appropriate imaginative play, or check back next week for our follow-up post, which will tackle exactly how to limit screen time and keep kids happy and engaged in the physical world.