33 Fantastic Fall Activities and Events to Enjoy in October 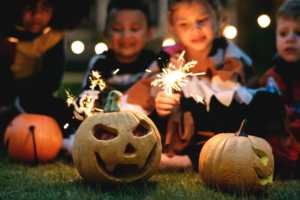 There are a multitude of activities and events to satisfy children of all ages. Our list features programs, workshops and exhibits for members of the entire family to enjoy!

Candytopia: Satisfy your sweet tooth with Candytopia, an interactive, limited engagement where family and friends can unite to experience sugary delights over a dozen environments. For a more detailed look into the fun, visit their Instagram page here. This candy kingdom will close its’ doors on Thursday, November 15th but before it does, visit it at Penn Plaza, located at 145 West 32nd Street, New York City.

Halloween Harvest: For the month of October, Luna Park will be transformed into “Treasure Island,” featuring Story Pirates, Magicians, Stiltwalkers, creepy arts and crafts, and a costume party to determine the spookiest character! The festivities take place from now to October 28th at Luna Park in Coney Island, located at 1000 Surf Avenue, Brooklyn, New York.

Spooky Pumpkin Garden: Kick off the month of October with a trip to The Everett Children’s Adventure Garden at the New York Botanical Gardens. Families can explore the nearly 1,000 rare and unusual pumpkins, put on their own puppet show featuring various insect, owl and scarecrow puppets, and learn about bats. Visitors on the weekend will enjoy access to live presentations featuring snakes and lizards and be able to partake in pumpkin carving demonstrations. The Gardens are located at 2900 Southern Boulevard, Bronx, New York.

Harry Potter: A History of Magic: Fans of The Boy Who Lived can now take a trip to peruse original material from Harry Potter publisher Scholastic and J.K. Rowling’s original archives, including drafts and drawings by the author herself. The exhibition features newly created artwork for the 20th anniversary edition of the series, an enormous steamer trunk used to transport a signed copy of Harry Potter and the Half-Blood Prince on the Queen Mary to the U.S., as well as costumes and set models from the award-winning play Harry Potter and the Cursed Child. These materials are on display as of Friday, October 5th, at the New York Historical Society, located at 170 Central Park West at Richard Gilder Way (77th St.), New York City.

Charlotte’s Web: The BMCC Tribeca Performing Arts Center is hosting a one-day performance of Charlotte’s Web, the beloved children’s classic by E.B. White on Friday, October 5th. The event is geared toward ages’ 5-10-years-old and will be held at the venue, 199 Chambers Street, New York City.

Family Breakfast with the Animals: On Saturday, October 6th, visit the Central Park Zoo for the opportunity to enjoy a light breakfast and animal-themed activities featuring the Red Panda. Tickets sell fast so make sure you grab yours today! The 6.5 acre zoo is located inside the park at East 64th Street and 5th Avenue in New York City.

Woodland Wonderland: The Ramble: Enjoy a beautiful fall day enjoying the woodlands inside Central Park. Families can learn more about the architecture, landscapes and ecosystems of the Park. Interested parties should meet at the Loeb Boathouse Express Café on the East Drive and 75th Street in New York City. If you are unable to make the October 6th date, an additional walk will be held on Saturday, October 20th.

The Amazing Maize Maze: On Saturdays in October, the Queens Farm is hosting a hands-on, interactive corn maze. Families will use clues to solve puzzles in order to find their way out of the maze. There is also a Maze by Moonlight on Saturday, October 13th and Saturday, October 20th for those interested in the spookier version. The museum is located at 73-50 Little Neck Parkway, Floral Park, New York.

Native American Heritage Celebration: On Monday, October 8th, observe Columbus Day with a trip to the Museum of the City of New York to learn more about the history and culture of the Native American groups of the Northeast region. The museum is located at 1220 Fifth Avenue at East 103rd Street in New York City. Additional Columbus Day Events will take place at Prospect Park and Staten Island Children’s Museum, the latter of which will have free admission all day.

Harry Potter Family Book Club: Looking to introduce your little ones to the Wizarding World? Join the New York Historical Society on select dates this season to discuss these magical books. The first session will take place on Tuesday, October 9th, with an introduction to the first book in the series, Harry Potter and the Sorcerer’s Stone. The venue is located at 170 Central Park West at Richard Gilder Way (77th Street), New York City.

Rain at Drop Bear Theatre: An intimate, engaging experience, the Seam and Drop Bear Theatre designed Rain specifically for infants and babies who are not yet able to walk. During the performance, a trio of performers on cello, voice, and percussion act as tour guides for the young children on their introduction to the rain. Performances take place from Wednesday, October 10th to Sunday, October 14th at the Clark Studio Theater, 165 West 65th Street, New York City.

Greenlight 9th Anniversary Celebration in Fort Greene: Greenlight Bookstore is celebrating its’ 9th anniversary and to commemorate it, they are throwing their annual birthday event which will have decorations, giveaways and a 20% off in the bookstore all day! The event will take place on Saturday, October 13th at 686 Fulton Street, Brooklyn, New York.

Family Night at Madison Square Park: Madison Square Kids is hosting Family Night where children can enjoy live music, colored-pencil animations and storytelling. Pack up the picnic blanket, pick up some ice cream sandwiches from Melt Bakery, who will be selling them-on site, and enjoy the fun! The event takes place on Friday, October 12th at Madison Square Park, located between Fifth and Madison Avenues, between 23rd and 26th Streets, in New York City.

Wildlife Conservation Film Festival: The festival celebrates its’ 8-year anniversary and kicking off the week-long festivities is an opening reception and screening on Thursday, October 18th. Topics covered at the program include vanishing corals, tigers in Scotland, as well as a focus on buffalos, jaguars, grizzly bears, and other threatened animals. All film screenings take place at Cinema Village Theater, which is located at 22 East 12th Street (corner of University Place), New York City.

Halloween Murder Mystery!: With Halloween around the corner, families can get into the celebratory spirit by participating in this murder mystery game, loosely based on an actual newspaper account of an unidentified skeleton discovered at the Mount Vernon Hotel. The dates are as follows: Saturday, October 20th as well as the following weekend on Friday, October 26th and Saturday, October 27th. The Mount Vernon Hotel, Museum and Garden is located at 421 East 61st Street, New York City.

Song of the Mermaid: From Saturday, October 20th to Sunday, October 21st, don’t miss a trip to watch this exciting adaption of Hans Christian Andersen’s The Little Mermaid. Transformed into Song of the Mermaid by the K-Arts Ballet, this full-length story ballet is packed with an original score and unique movements. The fantasy ballet, a hit in Seoul, South Korea, will be making its New York City debut at the New York City Center, located at 131 West 55th Street between 6th and 7th Avenues, New York City.

Just Kidding: The Rainbow Fish: Adults will recognize a familiar face from their childhood at this performance: the Rainbow Fish from Marcus Pfister’s popular stories! During this glow-in-the-dark adventure, children will learn more about the Rainbow Fish and additional creatures of all shapes, sizes and colors. The performance will take place on Saturday, October 20th at the Peter Jay Sharp Theater at Symphony Space, located at 2537 Broadway, New York City.

Boo at the Zoo: A crowd favorite, Boo at the Zoo is back at the Bronx Zoo until Sunday, October 28th. Event highlights include the Haunted Pirate Hayride Adventure, the costume parade, a trek to the extinct animal graveyard and much more! The zoo is located at 2300 Southern Boulevard, Bronx, New York. If you’re unable to make it to the Prospect Park is hosting its’ own version as is the Queens Botanical Garden.

Halloween Fun Weekend:  The Green Meadows Farm has gone all out to celebrate Halloween, including the kid-friendly haunted house! During Trick or Treat weekend, visitors can engage in a scavenger hunt, take a ride on the hayride, and spend some time with friendly animals at the Bunny Barn. The events will take place on the last weekend of October at Green Meadows Farm at Aviator Sports and Event Center, 3159 Flatbush Avenue, Brooklyn, New York.

Make It: Lightsabers: The weekend of October 27th is the last weekend for interested participants to make their own lightsaber at the New York Hall of Science. This 90-minute workshop will allow children ages 6 and older to learn more about light and simple circuits, then using their knowledge to create their own glowing lightsaber. The venue is located at 47-01 111th Street, Corona, New York.

Halloween Pumpkin Flotilla: Celebrate Halloween in Central Park on Sunday, October 28th by taking part in the Conservancy’s signature Pumpkin Flotilla. This event is perfect for creative little ones! Simply carve and design your pumpkin at home, bring to the designated drop-off center, enjoy some activities, and at 6:30PM, watch the pumpkins float by! The program will take place inside Central Park at 110th Street between Fifth and Lenox Avenues.

Halloween Celebration: The Children’s Museum of Manhattan has a slew of activities and programs on tap for Halloween weekend, aka the last weekend in October. From a Halloween-inspired magic show to a musical Halloween costume runaway and dance party, there is something on tap for visitors of all ages. The museum is located at 212 West 83rd Street, New York City.

BAMboo!: Fort Greene is hosting a free Halloween-themed block party on Wednesday, October 31st at the BAM Cinema and Theater. The event will feature candy giveaways, carnival games, arts and crafts, and other fun, spooky activities for children. It will take place at 30 Lafayette Avenue between Ashland Place and St. Felix Street in Brooklyn.

At the Nanny Authority, our nannies are familiar with age-appropriate seasonal activities and programs, so parents can feel at ease knowing that their children are part of a cultural, educational lifestyle when they’re not around. To learn more about how we can assist you in the search for a professional nanny, contact us via e-mail or at 973-466-2669 today!